Life in the Loire after lock down. Weekly update 26th July 2020. 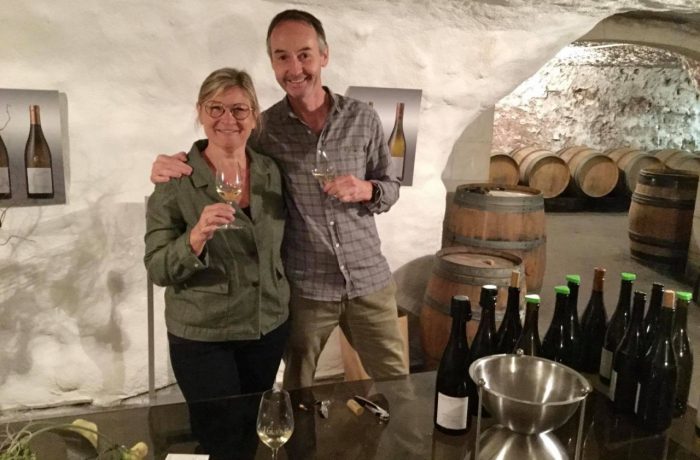 It almost felt like I was back at work this week. Two great visits to taste wine and see growers – one that we know from long ago and another competely new to me.

We called in to see Bernard Fouquet on Tuesday morning for a catch up and tasting in his winery in the centre of Vouvray.

Bernard’s wines are great and some of the first Vouvrays we ever showed to our customers in the early days of Le Tasting Room came from him.

We change the wines we show at tastings on a regular basis and it’s a while since we tasted his range so we popped over to see him again and had a retaste.

Nearly 2 hours and fourteen wines later, we emerged back into the sunshine from the cool of his cellar. Bernard is always fascinating to talk to. He takes a pragmatic approach in his vineyards. He’s not certified organic (and has no intention of getting certification either) but he does work with the environment in mind and avoids using both herbicides and pesticides.

He was telling us that he uses a natural product called Lithothamne in the vineyard as we approach harvest if there are any potential problems with mildew.

We’ve had warm days but really chilly nights of late and this can lead to mildew in the vineyard. Lithothamne is a marine algae that’s roasted and ground to a fine powder (you can use talc too). This powder is pulverised over the vines and it absorbs moisture. It replaces copper in the vineyard (which is toxic) and he’s convinced it works. Fascinating stuff.

You can use it on your tomatoes too!

Some of his wines were new to us. We particularly enjoyed Le Petit Clos 2019, a parcel that he bought in 2013. The 2019 is tight and had lovely minerality with hints of pear and apple fruit. It’s fresh and lean and has less than 2g per litre of residual sugar. Le Petit Clos is one of the few parcels that actually overlooks the Loire river.

Le Marigny 2018 was also tasting delicious . Open and with a little apparent oak on the nose, it recedes on the palate revealing lovely fruit and a hint of bitterness. It could probably do with a bit more time but is a lovely wine.

We finished our tasting with a glass of Brut Zero non dosé fizz from the 2015 vintage. Bernard uses the natural sugar in the grapes for the second fermentation and there is no residual sugar. Some of the wine is aged in barriques beforehand. It spends 4 years sur latte in the cellar before degorgement. Lovely oyster shell notes and a touch of brioche. A really classy sparkling.

We were happy to have reestablished contact with Bernard. Like many good growers in the region, he is fast approaching retirement age and at present neither of his children are interested in taking over. The future of the domaine remains uncertain.

On Wednesday I popped in to Domaine d’Orfeuilles – another Vouvray producer. Certified organic and working towards biodynamic certification I intended to just sweep in and buy a couple of bottles to taste alongside one of my Zoom attendees this coming Saturday.

Arnaud Herivault, 4th generation of the family to run the business was eager to show me the range so I ended up spending nearly 2 hours, tasting, visiting and chatting.

The wines were impressive. Not a domaine that had really been on my radar up until now. Maybe that’s because it’s not sold in the UK? I don’t know. It’s widely distributed in the USA which is great for us.

The Cuvée de Silex was also wonderful. From a parcel crammed with big flint stones you can just taste that gunflint note in the wine and an attractive citric note gives it backbone and minerality. Fermented 50/50 in tank and oak (a quarter new, 1,2, and 3 use barrels). At 14% alcohol it also escapes the dreaded Trump tax!

I had a slight meltdown with the neighbours midweek. The kittens have been coming into the garden almost daily and while they are super cute, we don’t want them installing themselves there on a permanent basis until they go to their new homes at the end of August.

Those of you who speak a second language will understand how hard it is to get cross when you’re not using your mother tongue. The lack of vocabulary can make you appear extremely rude! I think my neighbour thought I was on the limit lol. Still, no kittens since that ‘conversation’.

Thursday and Friday had me with my head in my old text books. I was boning up for my Zoom tasting on Saturday night and I enjoyed the studying, getting my statistics up to date and checking out current weather patterns for Vouvray and South Africa, looking at the different approaches to viticulture, irrigation and climate change. Interesting stuff.

And so Saturday came and the Zoom tasting was a great success (although I think perhaps I droned on a bit too much at first). I shared a glass of Vouvray and South African Chenin with people in New York, Georgia, Sussex and the Loire. Some of us had the same wines, some of us different ones. I talked about the differences between hot and cold climates, what defines them and how they are mitigated.

I hugely enjoyed it and look forward to the next one during which I’ll be able to give a full harvest report for the extraordinary year of 2020.

My revelation on the food front this week was meatballs made with chorizo sausages. I make meatballs quite often and until now have always used pork or beef mince and occasionally lamb (lamb is super expensive in France).

My brother mentioned he made meatballs using ‘cooking chorizo sausages’ when he’s staying in the south of France and I thought well why not.

I took the sausagemeat out of the skins and added a couple of handfuls of breadcrumbs, a finely chopped onion and a couple of cloves of garlic gently sweated in oil until soft and about a third of a preserved lemon (skin and flesh) finely chopped. In went one egg and some flat leaf parsely. I squished that all together and then formed meatballs that I then fried off in a pan until brown all over.

I sweated another onion and a couple of cloves of garlic in the pan, grated in the flesh of two big juicy ripe tomatoes and then added the meatballs back to the pan. They simmered gently for about 30 minutes before serving with some bulghur and a little dressed rocket on top.

Philippe Chigard’s Gamay was a fine match for that. Absolutely delicious, you have to give those a try.

Another culinary highlight this week was the Strapatsada that I made with the two remaining meatballs and their tomato sauce for lunch the next day.

I gently fried about 9 cherry tomatoes in a couple of tablespoons of olive oil before adding in the meatballs and tomato sauce. Then, in went two eggs. They gently scrambled.

Off the heat I crumbled over some Feta cheese and served it on homemade toasted sourdough with some fresh basil and a little olive oil to garnish. This would be brilliant hangover food (not that I had one btw).

Well that’s it for this week. It’s been quite a busy one hence the rather late posting.