Life in the Loire after lock-down. Weekly update 16th August. 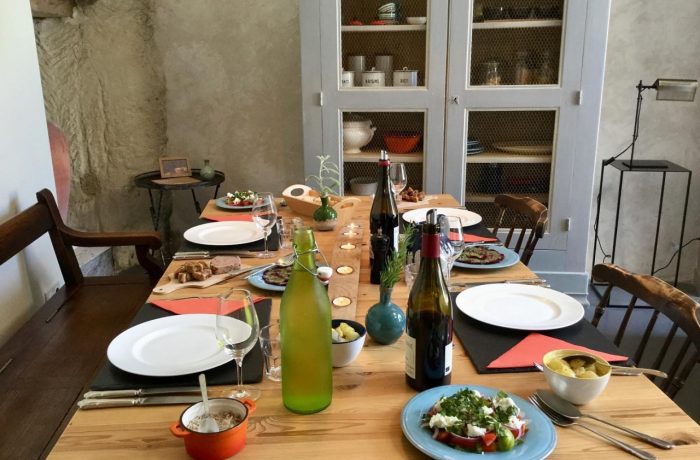 Well, we can pretty much say that our 2020 season is finished. The borders to the USA remain closed and this week the UK has introduced a mandatory quarantine for those entering the UK from France and France has reciprocated.

A total of 12 guests since February and 4 since the lockdown. This season is certainly going to be one that we remember for a long long time.

For reference, we’d normally expect to have between 300 and 500 guests a season.

Our planned visit to see family and my Dad in particular (who celebrates his 90th at the beginning of September) is now cancelled. Who knows when we’ll make it back to see him and the rest of the family? It feels that may be a long time from now.

The weather was baking at the beginning of the week and we took to eating in the cave which provided a slightly cooler spot for enjoying our meals. You might ask why we haven’t resorted to the cave before now? There’s a very good reason for that.

The swallows have been nesting in the cave. A couple of broods later and they seem to have finally flown the nest so we are able to take advantage of the cool at last.

It won’t be long before they decide to up sticks and make their way back to their winter home as summer draws to a close here in France. How incredible it is, the long journey they make on the wing.

Despite warnings practically daily of imminent storms and heavy rain (with the risk of hail which puts everyone on tenterhooks), they have not come to fruition.

The skies have gone black on many occasions, the wind has picked up. We’ve rushed to turn off the livebox, disconnent the computer, close the shutters and waited. To no avail.

On Saturday during the night, lightening streaked across the sky in the middle of the night. Nigel got up to open the water butt that collects water from our neighbour’s winery roof. It rained. Hooray we thought, at last. The growers will be happy.

The following morning Nigel went to check. Yes, we’d had rain. Quite a bit we thought.

The weather stations said otherwise. All that kerfuffle and noise brought just 6mm of rain in Noizay and just 1mm in Vernou sur Brenne the next village down. Hard to believe but true. The appellation of Vouvray has 40 individual weather stations at relevant spots all around the 8 villages and the reality was there to see.

In the past 7 days Noizay has had 15mm of rain whereas Vernou has had just 7mm. It just goes to show how localised it is and how rainfall can vary dramatically between one village and another (even within a village).

This week we’ve been trying one or two wines from the lesser known appellations within the Loire valley.

The weather was so hot at the beginning of the week that a couple of rosés were more than welcome. As wine professionals we tend to drink within a certain quality band and get a bit disconnected from all the other wines out there on the market.

Plenty of people out there are enjoying wine without wanting to spend too much or learn the detail and it’s important to have a handle on those wines too.

Nigel bought 2 rosés from the supermarket. One from the little known appellation of Touraine Noble Joué (tiny appellation, just 5 producers in a handful of communes around the city of Tours) and a St Pourçain from way down south in the Auvergne (most people wouldn’t even be aware this region is attached to the Loire).

Touraine Noble Joué is so called because it’s made from ‘noble’ grapes. All the Pinots – Pinot Noir, Pinot Gris and Pinot Noir. Light and fresh with lovely summer fruit notes, we were quite impressed with the quality for a wine coming in at 5 euros.

St Pourçain rosé is made from the Gamay grape and 80% of production in this region comes from the co-operative. In the late 18th century there were 8000 hectares of vines planted in the region but cereals, fodder crops and phylloxera took their toll and today there are 650 hectares in production.

We were a little less impressed with this wine but both agreed, lightly chilled on a summer’s day it was decent. Maybe a little less elegant than the Nobel Joué but at less than 5 euros a bottle…

Our dinners this week have been seasonal using up the never ending supply of courgettes and tomatoes from the potager.

A seafood and courgette risotto using orzo instead of rice (tiny rice shaped pasta) was light and fresh and Nigel made a delightful salad using beetroot and avocado with tons of fresh mint from the garden.

The tomatoes have gone into a rich spicy sauce to accompany giant pasta, a fresh salad with mozarella and basil, and have been roasted with fennel seeds and chilli and served with Greek yoghurt and feta cheese.

Finally, they made a rich sauce to go with my chorizo and preserved lemon meatballs that I served with bulghur wheat, caramelised onions, barberries, bay leaf, cinnamon and cumin last night.

We’ve had some cracking reds this week. Stephane Serol’s Les Millerands Gamay St-Romain 2018 was tasting just amazing with beautiful minerality. From the Cote Roannaise a long way from here, old vines planted on granite soils. What a treat that was. It costs around 12.50€.

Antoine and Nathalie’s Leduc’s Anjou Rouge Cabernet Franc 2017 was a timely reminder of what can be done in Anjou. Bursting with ripe fruit and lovely freshness it was the perfect match for our tomato pasta and at around 7 euros cellar door it’s amazing value for money (we also love Antoine’s Cremant de Loire).

It’s a while since we’ve had so many reds that have been tasting absolutely at their best and have been so compementary to the dishes we’ve put them with.

I had a busy day working at Tania and Vincent Careme’s tasting room on Friday. Lots of Parisiens, a couple from Geneva, one or two from the UK all happy to taste and discover or rediscover their wines. One customer came exactly 10 years to the day from his last visit. 2 children later and much water under the bridge he wanted to rediscover the domaine and take some wine back home.

And on Saturday. Yes, we had clients. Probably the last of the season. A young couple living in London, she Romanian, he South African. Fun and energetic, we had a lovely day with them. The quarantine was announced as they drove down from Dieppe! Luckily for them they can manage when they return.

We tasted together at Domaine Careme on Friday and then we went to see Louisa at Montdomaine on Saturday, tasted a range of wines in our tasting room (with the window open) and enjoyed a socially distanced charcuterie, cheese and salad lunch while swapping stories.

A walk along the Loire in Montlouis on Sunday in the early morning sunshine with a girlfriend made a fine end to the week. We walked down to the river and got sand in our trainers. Thousands of tiny shells here and there, the smell of water in the air, a few people camping out on the sandy banks.

A reminder that life isn’t so bad after all in the Loire valley.