Life in the Loire after lock-down. Weekly update. 13 September. 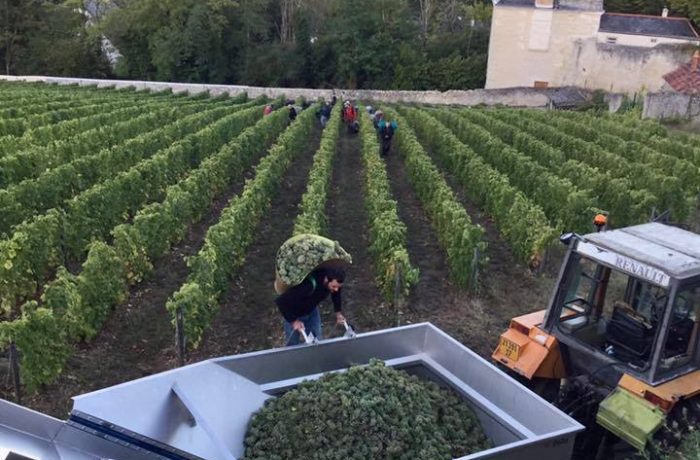 This week has been a whirlwind of hot days and happy pickers sweeping from one plot to another, bringing in the grapes for the 2020 vintage.

We’ve had the pleasure of following the harvest at Domaine Careme in the Vouvray appellation. Vincent Careme is considered to be one of the leaders in the appellation and it’s been fascinating to shadow him and his team, watching as the grapes come in.

It’s meant early starts for us. A bit of a shock after months of virtual inactivity. Up at 06h30 to grab a quick bite before meeting up with the team at whatever plot has been on the agenda. Picking has started at 07h30 every morning. The sunrises have been spectacular and the light amazing.

The official ban de vendanges for Vouvray was Monday 7th September. Growers can pick before that date but only if they ask for special derogation. Quite a few growers did and started last weekend but the harvest at Domaine Careme kicked off in earnest on Monday.

The first parcel to be picked was close to the domaine. A small plot planted by Vincent in 2002, the grapes from this plot will be made into a new wine called Clos de la Roche. 25 pickers picked up their buckets, the ‘hotteurs’ put on their hods and off they went. Harvest 2020 had begun.

A diverse team picking this year. The core team from the domaine, some old timers that have been picking for years, a group from Bulgaria and one from Cambodia.

No ‘fairing la bise’ (kissing each other) this year, no shaking of hands every day. Masks on and off. This is a harvest like we’ve never known before.

Every day this week, we’ve been up and out to check on the pickers. We’ve chatted with them during the morning ‘pause’ (the domaine gives everyone a coffee and a snack which could be a madeleine or a pain au chocolat).

We’ve sat and chatted during the lunch break, and rushed back to the winery to see the grapes being pressed, being tranferred to tanks for settling and finally, we’ve watched the Chenin juice being transferred to oak barrels for fermentation.

In the cellar, fermentations are already well under way. You can put your head to the barrels and hear the natural yeast doing its work as it fizzes and bubbles creating the nectar that we love – Vouvray wine.

Temperatures have been very hot and the harvest this year has been the earliest in history for many growers in the Loire. It’s also been a very dry season with little rain (not enough) and so volumes have been very moderate (after 3 years of hot dry conditions the vines are showing some resistence).

The problem with so much hot weather as we bring the grapes in is the danger of rapidly increasing sugar levels and with that, the reduced chance of making dry wines. It takes around 16g of sugar per litre to produce 1% alcohol and growers measure the potential alcohol in the grapes (by using a refractometer and analysing them in the lab) before picking.

In one parcel, the potential alcohol rose by 1.5% in just one week. It’s been high pressure for the growers, prioritising their different plots.

We also managed to catch up with some other growers while out and about. Just above us in the village of Noizay we watched Michel Autran passing through a parcel for the first time (the grapes in the parcel were not homogenously ripe so he was picking the ripe ones and leaving the less ripe ones for a second pass).

On Wednesday we stopped by to have a look at Vincent Foreau picking his St Mathurin parcel on the Vouvray plateau. Vincent and his father Philippe make some of best known and highest quality wines in the appellation. They have a chute from the vineyards above on the limestone hillside that feeds the grapes directly into the press underneath them. Vincent and his team were making a pass picking grapes destined for sparkling wine and then will go out again to pick the remaining grapes to make sweet wine.

Another highlight of the week was to spend a little time with Philippe Chigard and his wife Claude Airaud-Cabel in their tiny 25 are vineyard La Table Rouge. This beautiful vineyard is in the heart of the Vouvray appellation (in our village in Noizay) in the Vin de France category. This gives them more flexibility to run the vineyard as they would like.

La Table Rouge is a little haven of biodiversity. Peaches and plums, roses and lavender, rosemary and thyme, wild flowers and vines all jostle for position in this tiny parcel. It’s buzzing with bees and insects and the grapes came in looking as clean as a whistle with no hint of sunburn (a problem this year again after the very hot weather).

Drawing the week to a close, yesterday I joined Lousia at Chateau de Montdomaine for her second harvest for the ladies only wine the Ballade des Dames. Made exclusively by the girls both young and old (with maybe a teensy bit of advice from Louisa’s husband Fred), about a dozen of us picked the Chardonnay grapes and brought them back to the winery for pressing.

As the juice was slowly released from the grapes, we lunched under the shade of the trees. Husbands/boyfriends/partners were allowed in on the celebrations as we sat together reflecting upon a week of hard work in the vineyards in 2020.

Our dinners this week have almost exclusively been created using storecupboard items mixed with what was left in the fridge or freezer. Comforting sardines on toast, pork fillet with white beans, duck with miso and noodles, lentils with courgette, spinach and an egg. It’s amazing what you can come up with when you think you have nothing!

Harvest continues into next week. Domaine Careme has some red grapes to come in for the production of its Fizzy Pink sparkling and Montdomaine has yet to pick its Cabernet Franc and Malbec.

Temperatures are due to soar to 36°C this week. It reminds me of 2011 when we were picking in Anjou at the end of September when the temperature was 32°C. It seems that climate change is here to stay.

So, all in all a very exciting week. Our local villages have been a hive of activity with tractors, machine harvesters, pickers and winemakers all immersed in the 2020 harvest. As it draws to a close this week in Vouvray, everyone remains in high spirits.

This is a vintage we won’t forget!