Life in the Loire after lock-down. 9th June. Day 30 of déconfinement. 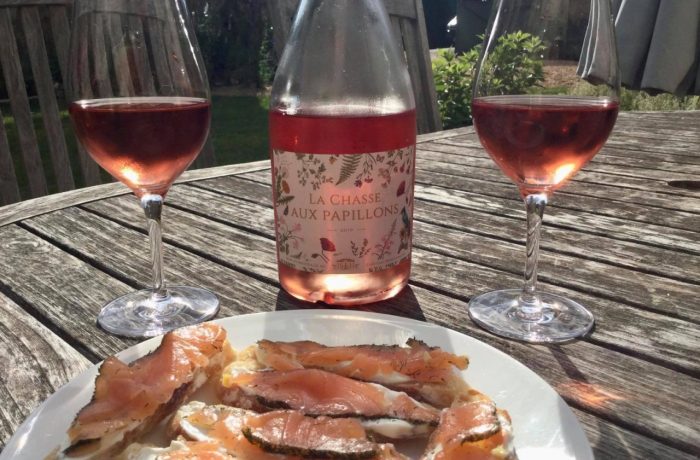 There’s a lovely spot in the garden that’s giving us real pleasure at the moment. By the border under the tilleuil tree, there’s a border and at the front of the border are some self seeded flowers.

Some of them are growing up amongst the gravel and we’ve just let them be. I don’t know what they are. I probably should. Soft purple and white they blow gently in the wind and are the perfect cottage garden flower. Maybe you know what they are?

The rest of the border has been more problematic. The sedum (which was there) is very happy and the acquilegia loves it. The phlox (that was also there when we arrived), has never looked happy and then there’s the lupins and delphiniums we planted ourselves (they look miserable).

But the flowers that decided to put themselves in the middle of all that, are happy and pretty. Is nature trying to tell us something? I hope they come back next year.

High drama in the vineyards this morning. Tania Careme sent me a photo of a wallaby in Le Clos. I sent her back a message saying “lol really looks like one” upon which she called me and said “it’s true”!

A wallaby escaped from the zoo in Autreche in February and it’s been on the run ever since. Apparently it’s been around Vernou and Noizay for a few weeks now. Try explaining that to your insurer “Well we don’t have any grapes this year because they’ve been eaten by a wallaby”.

Currently in the garden of one of Tania’s neighbours, the zoo is on its way to try and catch it. Who ever said there was no drama in the sleepy villages of the Loire valley?

Lunch today was the rest of the smoked mackerel with salad from the garden. For the first time in a while we were able to eat outside although tops were going on and off as the sun was either out or obscured by clouds.

Nigel had a quick word with our neighbour, winemaker Thierry Cosme who was busy filling up a small water tank to go up to the plateau and water his new vines. They talked about the current situation and he said he has been affected but has managed to keep some element of sales going. He’s been driving to Paris, Brittany and all over France once a week making deliveries. Other growers are deciding this week whether they will opt for sending some of their wine for distillation.

Chez Bruno is Amboise is still doing well which is good news for Louisa and Fred. The lunch services have been very busy with slightly fewer in the evenings but then again the weather hasn’t been great this past week. It’s encouraging.

Early evening I went out on the bike with the personal trainer (Nigel). 5O minutes of cycling around the vineyards. Luckily the back held up and it feels good to have done some exercise despite still wheezing like an old woman going up any sort of a slope.

We passed by La Table Rouge in Noizay and made a brief stop to have a quick look. Such a peaceful spot. 100 year old vines, apricots, redcurrants, blackcurrants, lavender and roses all jostling along together, happily cohabiting.

A small glass of La Chasse aux Papillons rosé in the garden with a few smoked salmon nibbles and then dinner inside as the sun went down.

This evening I roasted two big red peppers with half a dozen shallots and 5 or 6 cloves of garlic cut in half but not peeled. Alongside, 2 chicken legs, everything sprinkled with a mediterranean herb mix and a glug or two of olive oil.

Some Noirmoutier new potaotes cooked with a couple of sprigs of fresh mint from the garden and we were nearly there.

New potatoes in the bottom of the bowl, the peppers and shallots, the chicken on top and then I made a sauce using Greek yoghurt, tahini and lemon juice with a little salt, thinned down with water.

A final sprinkle of my newly acquired dukkah and voila!

Still no internet in the house tonight so we watched a golden oldie – Marnie starring Tippi Hedron.