Life in the Loire after lock-down. 31st May. Day 21 after déconfinement. 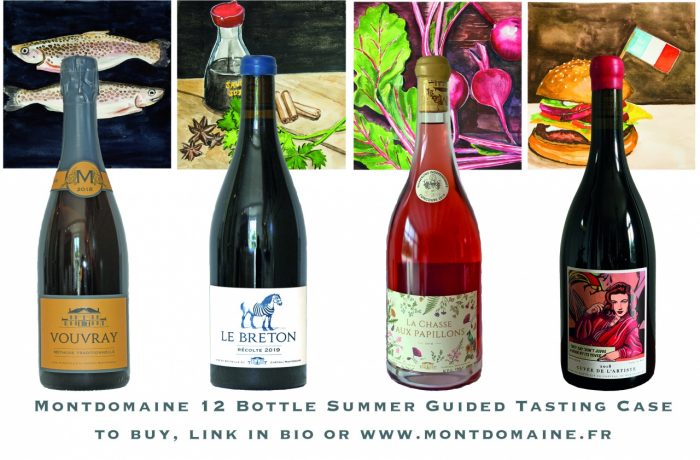 I think I could write a book about Nigel’s dreams. His dreams are far more exotic and exciting than mine although they are (on the whole), more like nightmares.

The other day, he woke up and said he was being chased by Vincent Carême and his army. Vincent is a charming winemaker in the Vouvray appellation. A calm quiet man that makes amazing wine. The last person on this earth that would be chasing Nigel with an army of men behind him.

If only we could interpret our dreams. What do they mean?

We came downstairs to the washing up this morning. “Did we have people round for dinner” Nigel asked.

And we did – sort of. Our Zoom dinner party with Ali and Jos was loads of fun and we felt more than a little jaded as a result. It was a first for us (I know loads of people have been doing it since the lock-down), and it was more fun than I thought it was going to be. Not that I thought it wasn’t going to be fun. On the contrary. I just thought it would be odd. And I guess it was odd in a way. Odd but fun.

Most of today was spent tweaking my newsletters. It’s funny how you have to read through something dozens of times to spot the tiny mistakes. Somehow, when you’ve written things yourself, when you read them back again, you skip over the errors and read it as it should be in your head.

But, they’re done and when I pressed ‘send’, it was with anticipation and hope that our Montdomaine Summer Guided Tasting Case will be a success. We’ve put a lot of work into it and it’s been great fun working with Louisa developing the recipes, taking photos, drinking coffee and getting generally distracted from all the other bad news around us.

The big chateaux around us have reopened this past weekend. In most cases there have been more staff than visitors which has probably been wonderful for them and worrying for the staff. It will take time for things to get back to anywhere near like normal I think.

Nationally tourism accounts for 9% of the economy but here in the Loire, it’s 15%. The Loire jostles for position with Provence and Paris when it comes to the top destination for tourists in France. When travel becomes possible, you’ll have to come and see for yourself.

In the mood for something spicy tonight so I decided to make a Thai style curry using some pork fillet. I gently fried a red onion with one red pepper before adding a couple of cloves of finely chopped garlic and a tablespoon of green curry paste (always in the fridge). In went 200ml of coconut milk and finally, for the last five minutes, some pork fillet cut into pieces. That’s it. So quick and so tasty.

Alongside I cooked some basmati rice with spices and chickpeas, a ready made mixture that I bought from the little epicerie in Vouvray that sells things loose. It was fabulous. Good enough for an easy supper on its own perhaps with an egg or just some cucumber and yoghurt.

We enjoyed a glass of Vincent Carême’s Spring Vouvray 2018 as an apertif in the garden (seemed churlish not to having been so rude about him earlier) and then opened a bottle of Domaine de la Cotelleraie’s Les Perruches 2017 Cabernet Franc from St Nicolas de Bourgueil. Perfect with the curry. Lovely ripe fruit and soft tannins that didn’t clash with the heat of the curry.

Just before bed I received an email from Louisa. Our first order for the Summer Guided Tasting Case. Hooray! Our friend Joyce in New York has got the ball rolling. So happy and grateful for her support.

As I closed my eyes tonight my thoughts turned to the turmoil in the US at the moment after the ghastly death of George Floyd. What kind of a world are we living in at the moment? I feel outraged, and I feel sad.