Life in the Loire after lock-down. 19th May. Day 9 of déconfinement. 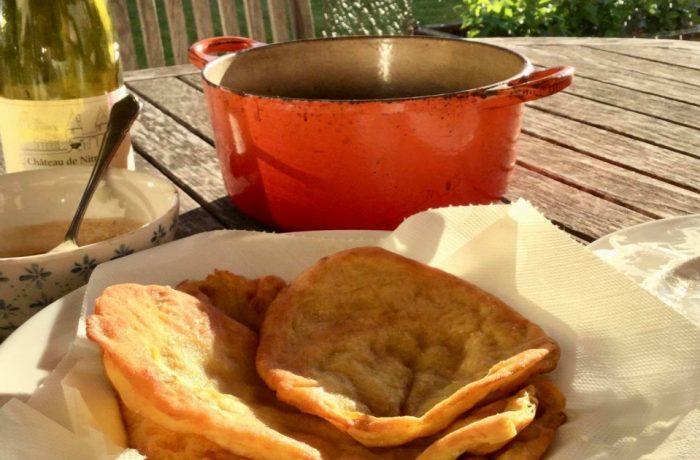 Bad news from the UK. The vineyard where Nigel worked before we moved to France suffered terrible frost damage a few nights ago. 90-100% damage. That’s hard.

The article says that it’s the first frost damage the vineyard has experienced in 46 years but Nigel remembers well there was a sharp frost that led to quite substantial damage in 2005, the year before we moved to France. He recalls driving down to the vineyard that morning, (it was around the 11th May so a similar time to this year’s damage) and seeing the devastation. A sea of brown. The tender green shoots all burnt by the cold.

The perils of making wine in a cold climate. We know only too well here in the Loire.

Emmanuel Macron and Angela Merkel have presented a joint plan to spur EU recovery from the coronavirus crisis. A 500 billion euro recovery fund to offer grants to the countries that have been the hardest hit by the crisis. This is the first time that Germany and France have agreed to allow the EU to raise debt jointly. The overall eurozone economy is set to shrink by a huge 7.7% this year.

Meanwhile President Trump says he’s been taking the anti-malarial drug hydroxychloroquine and is threatening to permanently freeze funding to the World Health Organisation unless improvements are made in the next 30 days. Jeez – it must be lunchtime.

In my panier this week I had a selection of teeny beetroots. Stripey, classic purple and yellow. Last time I roasted them with balsamic vinegar, garlic and marjoram but this time decided to just leave them be. I sliced them as finely as I could using a mandoline and then made a garlic and fresh chive dressing that I drizzled on top. I pan fried a few baby leeks and 2 baby artichokes too and we enjoyed them with a couple of hard boiled eggs for lunch in the garden.

Just a teeny sourdough mention. I’m making another loaf today taking instruction from the Sourdough School ‘the ground-breaking guide to making gut-friendly bread’. I think my gut is very friendly actually. It seems to be getting bigger every day. Could this be linked to the amount of sourdough bread I’ve been eating over the past two months?

There are so many different methods of making sourdough. Can you believe that? “Yes”, said Nigel ” I can, you just told me”. Do you think he’s getting really fed up of it?

I think I’m eating more bread than I would normally. When you’ve invested all that time and palava making it, you do feel compelled to eat it. So I do!

It’s really been quite hot here in the Loire these past couple of days. Despite slapping factor 50 on my face yesterday in preparation for my walk I neglected the rest of my body. That was stupid. I got rather sunburnt. Must be more careful.

For dinner tonight I found a recipe on foodandwine.com that caught my attention. Chickpea doubles with tamarind sauce. What are doubles? Well, I had no idea myself so looked them up.

Doubles are eaten as street food in Trinidad and Tobago. They’re normally eaten for breakfast but also as a snack or light lunch and apparently are great hangover food (I can see why!).

Anyway, I made the bara (flatbreads), the chickpea curry and the tamarind sauce and it was delicious. Totally vegetarian and substantial enough for dinner. I’d definitely do it again. The flatbreads have ground cumin and turmeric in them and puff up when cooked going crispy and brown at the edges.

I added a little Greek yoghurt to serve with some chopped sage from the garden which is not authentic but they were soo good and I totally think they would wake up a jaded palate.

The tamarind sauce and chickpea curry can be done in advance so all you have to do is make the flatbreads. They take an hour and a half to prove before cooking and then take about 30 seconds each to cook.

Doubles were first created in 1936 by Emamool Deen (aka Mamudeen) and his wife Raheman Rasulan in Fairfield, Princes Town. Originally there was just one flatbread served with the curried chickpeas but people kept asking them to ‘double the bara’ so the popular snack became known as doubles.

So now you know. Or maybe you knew anyway?