Life in the Loire after lock-down. 17th May. Day 7 of déconfinement. 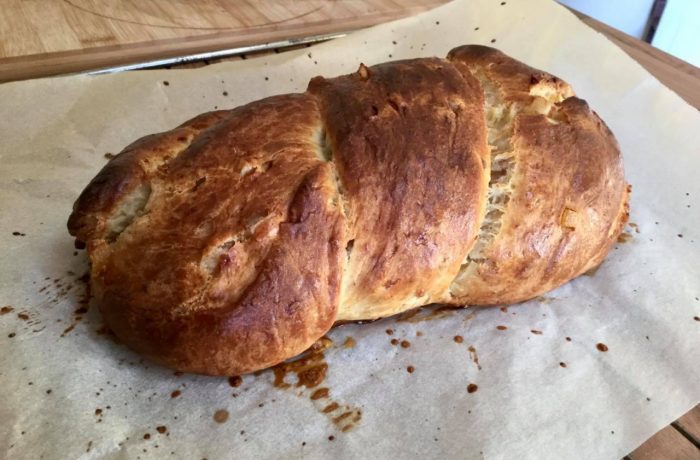 It’s a brioche Jim, but not as we know it! Star Trek fans will know what I mean. It’s delicious, it looks great, and there are yummy chewy bits of candied orange rind in it but…

The texture is more like a tea cake or a scone. Sort of crumbly and a bit cakey rather than light and fluffy.

I decided that what it needed was a bit of butter. Oh yes, that made a difference. A thin layer of creamy butter with those little salt crystals poking through. Butter on butter. Nigel doesn’t like butter though (actually no, that’s not true, I will clarify). He required coffee alongside. I think it might be nice toasted so will try that tomorrow. Lightly toasted with some butter. Nigel will like that because he likes melted butter on toast but not butter on bread (quite different obviously).

I have a huge weakness for butter and try to avoid it if I can. I could just eat a slice of butter on its own (you see the problem).

As we were having an apéro outside in the garden last night there was a knock on the gate. Two masks delivered courtesy of the Mairie. Each one in a separate plastic bag. They can be washed and used a maximum of 15 times, then it’s the poubelle (dustbin). With them came the village newsletter. Not much good news in there this month.

A beautiful bright and sunny day here in the Loire. It’s Sunday (I think). All days feel the same these days although we do try and differentiate between the week and the weekend. Is there any point in doing that? I don’t know. We tend to splash out a bit more on what we eat at the weekends and try new things, maybe have a cocktail, go for a walk.

So what else is new since we came out of confinement? Well apparently it’s all been kicking off at the dechetteries (that have been closed for the past 2 months). Queues of up to 50 cars waiting to get rid of their rubbish. Confrontations with the people in charge, shouting and abuse. Isn’t it funny. In normal times you never get round to going to the dechetterie (the dump) to get rid of those things that have been cluttering up your life, garage, attic, garden for years. You promise yourself you’ll get round to it but you never do. Now they close for a couple of months and the first priority on your list when they open is to get straight over there.

More positively it was lovely to see a report from the coast in Aquitaine where beaches have been reopened. You can’t lie around sunbathing or sit on a bench and daydream but you can take a brisk walk or go surfing. Listening to the joy of regular surfers as they got back into the waves was very uplifting.

Lunch in the garden today. A delightful salad that really hit the spot with just one small glass of chilled white wine.

A base of salad leaves, some freshly chopped chives from the garden, a ball of buffalo mozarella torn into chunks, some Speck (you could use any dried ham like Serrano or Prosciutto), a couple of nectarines sliced, little blobs of the radish top pesto that I made yesterday, lots of fresh mint and a very simple dressing of freshly squeezed lemon juice and decent olive oil seasoned with salt and pepper.

In anticipation of dinner this evening Nigel opened up a bottle of Chateau Yvonne 2010, Saumur Champigny. It was corked. The first corked bottle we’ve had in a very long time. It’s no reflection upon the winemaker, just a thing that happens. He opened a second bottle – no problem.

2010 remains one of our favourite Loire vintages for both whites and reds. The 2011 that followed made wines that were more ‘fruit forward’, very easy to appreciate and to sell but the 2010 is the one we would choose. The wines have lovely fruit, but it’s the freshness on the palate that wins us over. We only have a couple of bottles left of Mathieu’s 2010 Chateau Yvonne and on tasting we realised that we really need to put them away.

It was a lovely bottle of wine. Full of rich plummy fruit and a touch of smoke. The ripeness is still evident on the nose and the freshnesss still present on the palate. Silky tannins that are well integrated. If you look carefully you’ll see that the label on the bottle is incorrect. It says the contents are 1.5L (a magnum). If only! I think I’ll complain to Mathieu!

Nigel was in the kitchen this evening. A rosemary and herb crusted loin of pork roasted in the oven with some sautéed new potatoes and some of the baby carrots cooked in a foil parcel with thyme and butter.

Unless you’re used to cooking the same weight of meat, it’s hard to get the cooking time bang on for pork. You want it to be cooked through but not overcooked. Meat continues cooking after it comes out of the oven so not long ago we invested in a meat thermometer and it’s been useful. We took it out the oven when the internal temperature was 64° and it rose to 75° just a teensy bit higher than we would have wanted. During resting time, the external temperature of the meat decreases and the juices inside redistribute in the meat making it moist and easier to carve.

The wine and the pork were lovely together and as we lost the evening sun we retreated back inside for a little cheese.