Life in the Loire after lock-down. 15th May. Day 5 of déconfinement. 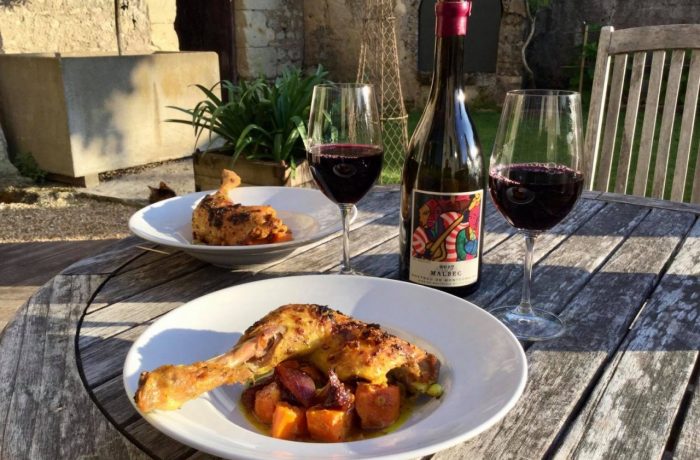 As you know I’ve been extremely slack when it comes to exercise during the lock-down. Despite promising myself I would do something every day, it didn’t materialise. Probably a mixture of laziness and lack of morale as time went on.

This morning I was back out walking through the vineyards with Briony. I’ve got an app on my phone that tracks how far you’ve been, how long and calories used so I pressed the button and off we went.

Bright and sunny this morning there was also quite a breeze. We were deliberating if we were correctly dressed. It’s very open in the vineyards and the wind can be biting. We decided that layers could be removed if necessary.

After a brief encounter with a neighour’s dog (who ran out agressively and lurched at poor Neige, Briony’s dog), we headed off up into the vines and wended our way around paths and grassy tracks returning home and hour and a quarter later.

There were few people out and about in the vines. One or two removing excess shoots here and there, one or two white vans parked up in the distance. This week is an important week in the viticultural calender. The 11th 12th and 13th of May are the Saints de Glace (the ice saints).

Gardeners and farmers typically expect a sharp dip in the temperature at this time (and it’s often the case). Luckily this year, it seems the Loire is out of the woods. Temperatures are set to stay above zero so the risk of frost in the vineyards is over. Not so in the UK though, I saw yesterday that a vineyard in Yorkshire had severe damage this week (yes you read that correctly, a vineyard in Yorkshire, the North of England!).

And yes, we were dressed inappropriately. Within 10 minutes we were both stripping off a layer. My trusty brown lock-down fleece tied around my waist for the rest of our walk.

Sitting in the garden having lunch (a simple sandwich with today’s sourdough, a little cheese) we watched 3 goldfinches come and drink from the water bowl on the edge of the decking. It’s funny. We were only saying yesterday how we don’t see them here (we had loads coming to feed in our old house in Anjou). They kept coming and going throughout the afternoon, not feeding, just having a few sips here and there. So pretty with their striking colours.

I drove into Amboise to shop for essentials this afternoon. Butter, milk, flour, yoghurts. Tomorrow I’m picking up another panier of mini-vegetables from the little épicerie in Vouvray so our weekend menus will be planned according to what we are given. It’s about 3 weeks since our last order so I imagine the veg will have changed.

For dinner this evening I roasted the chicken legs and wings from a free range chicken (I jointed it saving the breasts for another time and the carcass for stock). I peeled and cut two sweet potatoes and two red onions into similar size pieces, popped them into a bowl and mixed them with some freshly grated garlic, ginger, a teaspoon of powdered turmeric, a little salt and olive oil.

I put the vegetables into a roasting dish so they sat in one layer and then put the chicken pieces on top (I tossed them with some thyme, the finely grated rind of a lemon, the juice of a lemon, olive oil and some salt and pepper). 45 minutes roasting in the oven at 190°C fan and it was ready. A small salad of lettuce and cherry tomatoes with a light dressing alongside.

While the chicken was cooking we enjoyed a glass of Tania and Vincent Careme’s Spring Vouvray in the garden as an aperitif. It’s a delightful Chenin Blanc, light and fresh, so easy to drink. A really lovely wine.

We had a brief word and exchanged photos with our Texan friends Kim and Walter. They have a travel company called Artistic Gourmet Adventures and are having a tough time at the moment with all their tours cancelled. We’re all in the same boat. The next few months are going to be hard for us all.

The chicken was disappointing. It was tough and no amount of extra cooking was going to make a difference. Choosing a ‘Label Rouge’ chicken meant that it had had a better and longer life than your average chicken but I think this old bird had been running around for rather too long. The flavours were lovely but spoiled by fighting to get the meat off the bone.

What was really delicious though was the Artiste Malbec 2017 from Chateau de Montdomaine that we drank alongside it. It was a good pairing and the great wine made up for the disappointing dinner. The 2017 has a lovely balance of spicy fruit and a refreshing palate. There are few bottles left, the 2018 is following on behind. It’s a fabulous wine too but with more structure and concentration due to the vintage year.