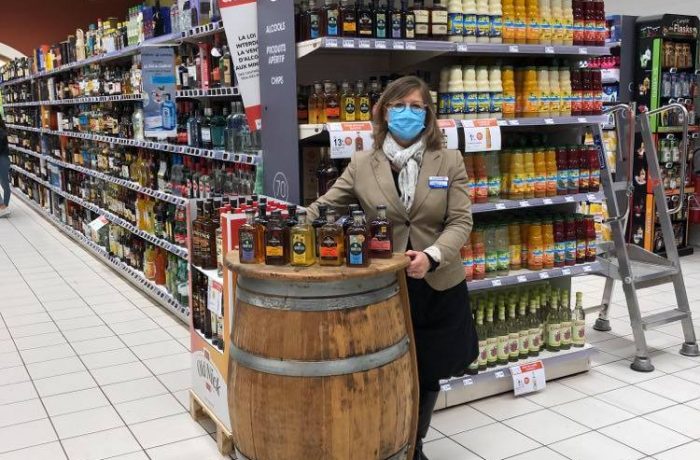 That’s what they call it isn’t it? Pivoting. Swinging around as if on a pivot. Trying different things.

Well that was me last week. After a rather traumatic start to being an ‘animatrice’ in the supermarket selling Lionel Gosseaume’s new rosé, I then spent three days trying to persuade people in Blois that what they needed more than anything for the weekend was a bottle of rhum arrangé (flavoured rum).

I was grateful for the baptism by fire the weekend before. I knew what was required to engage with people and how to attract their attention. I’d become accustomed to being ignored and had my plan.

Day one went very well. I sold 42 bottles of rum. All was well. Good work I told myself.

Day two. I arrive early as normal and set myself up. I brought along my little stepladder (too small to reach the bottles to do the stocktake the day before) do my inventory. Off I go.

No thank you, not at all, I don’t drink alcohol. Here we go again.

Then another lady arrvies. Who’s she I wonder as she wheels in a trolly with a stand to erect beside me. She’s older than me but clearly way more experienced than me.

She’s there to promote Havanna White and Gold rum for the next two days. Two of us side by side competing with each other.

She’s in a bit of a fluster. I remain calm. I’ve already done one day. I’m not moving.

Several conversations later with the Sous Directeur and the Chef de Rayon we agree on a plan. I’ll move to the other end of the aisle for the day and the next day we’ll swap over. That way we both have the same opportunity to sell our rums.

So I settle in at my new station and carry on as before.

Every half an hour or so the other lady (Marie-Claude) pops down for a chat telling me she’s selling nothing at her end. How am I doing she asks. How old do you think I am she asks? Can you believe I’m 73? What do you think about that then?

Actually, I’m flabberghasted she’s 73. She looks amazing and seems to have more staminer than me by a long way. Off she goes for the next half an hour and then she pops down again.

Marie-Claude does this often and knows everyone in the store. As people go by she tells me little stories about them and their lives. She might be promoting yoghurts one week and cider the next. Two days a week minimum she tells me.

As the day goes on I learn a bit more about her. Her husband died two years ago and she still hasn’t reconciled herself to the loss she feels. Working in the supermarket gets her out of the house. It gives her a reason to ‘be’ and she enjoys the human contact.

She visits her husband’s grave at least twice a week and talks to him while she’s there. ‘I know he’s listening’ she says, ‘and I find it comforting’.

As the day draws to an end, she’s had a hard time selling Havanna Club. I’ve had rather more success but then we both agree that I had a wider range of products in all sorts of flavours. I had an easier job. She’s not resentful. She’s happy it went well for me.

We pack up and head off for the day. She accompanies me to reception and introduces me as her new ‘copine’ explaining to the lady on the desk that I need a ‘tampon’ (stamp) on my paper to prove to the agency I was actually there when I said I was.

She said she hopes she’ll see me again some day. She said I did a good job. She said I was nice. She was nice too. A kind, gentle woman grieving the loss of her husband. I hope I see her again one day.