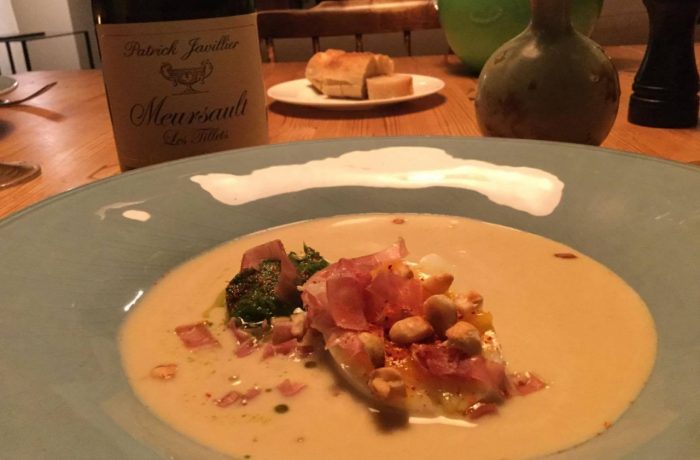 Snow fell at the beginning of last week. Just a little. Enough to turn the vineyards into a sparkling winter scene as temperatures plummeted down to minus 6.

We rarely light the wood burning stove until the evening but when it’s this cold, out come the sticks in the morning and the constant glow of the embers and the lick of flames from the wood provide such comfort.

A fire is hard to beat when it’s this cold outside.

The garden is frozen solid and the birds seem to spend most of their time eating from the feeder, trying to replenish their reserves to keep warm.

Inside, Pesto snoozes endlessly on a chair, curled up on a blanket that’s meant for us when we’re chilly but it has become hers.

I pop in and out of the salon during the day to take advantage of the heat. First of all I face the flames, gently rocking from side to side for a couple of minutes. Then, I turn around and toast the other side. Then it’s off to complete the next task.

I did venture out for a walk with a girlfriend mid week. Wrapped up with thermal leggings under our jeans we headed off up into the vineyards for a long stroll. The wind was blowing in our faces and within minutes we were flushed from the biting cold, our chins feeling immobile and frozen.

The vineyard plateau is wide and open to the elements. We glanced at each other as we perservered both thinking ourselves slightly mad for going out at all. And then, we switched direction, the wind dropped and all was well. So, on we went, winding our way through the vines, crunching the ice beneath our feet.

It’s been so wet recently that many of the vineyards are submerged in water. Water now frozen solid. It looks like some of the vines are poking out of an ice rink.

I tried a few new recipes this week. Some very successful, some less so.

Now, I pride myself on my own onion tart. It contains a staggering 9 or 10 onions, cooked down very slowly in a copious amount of butter resulting in a luscious heap of sweet, caramelised deliciousness that I mix with cream and eggs before baking in a pre-cooked pastry case. Can Julie beat this?

Well, yes and no.

I decided to try out a new pastry for the base. That was a great success. Helène Darroze’s recipe is butter heavy (always good in my book) and has the addition of fresh thyme leaves and piment d’Espelette. It’s short and crumbly and has a really nice flavour. As always with recipes from professional chefs, the quantities turn out to be way more than you need so I have frozen half for another tart another day.

Back to the onions. 6 of them, halved (skin still on), slowly roasted in the oven with lashings of butter, grated lemon rind, fresh thyme and honey smeared on the cut sides. Then, stock and wine in the bottom of the tin and slowly roasted for an hour and half, basting regularly.

Out they come, leave them to cool and then slip them gently out of the skins keeping them whole. They smell divine and look lovely.

Some grated Gruyère on the bottom of the pre-baked pastry case, the onions placed strategically around and then a savouriy custard of eggs and cream with freshly snipped chives poured gently around leaving the onions poking out the top.

Back in the oven on a very low heat for just over an hour until the savoury custard is just set.

It looks wonderful. I’m slightly irritated at the distribution of the chives that seem to have bunched up in random groups rather than remaining evenly distributed throughout the custard but hey, I’m nit picking here.

We have it at room temperature with some waxy new potatoes and a dressed green salad on Saturday lunch time with a class of Le Clos des Fées 2019 Côtes du Roussillon Blanc which is delicious as well. Yes I know we’re drinking at lunchtime but it is Valentine’s weekend. A hit. Yes, but Nigel said he still prefers my onion tart to this one. Hmm.

With it being Valentine’s Day I decided to up my game and make something special for dinner. We’ll have a starter and a main course I decided.

Back to Helène Darroze (3 Michelin* chef working at the Connaught in London). Rosie gave me her on-line cookery masterclass series for Christmas so I took inspiration from that.

A creamy white garlic soup served with a small quenelle of tarragon purée, half a softly boiled egg, shreds of prosciutto ham, a sprinkle of piment d’Espelette and fleur de sel and a scattering of crushed toasted hazlenuts.

Yes, you need to like garlic (and perhaps not be seeing people afterwards that don’t)

Sound delicious? It was. Definitely one to do again. I just need to find the perfect bowl to serve it in. Mine were a little too large. You know what it’s like, you never have the right bowl for the right dish do you?

Moving on to the main course. Italian beef Braciole in a rich tomato sauce with gremolata (might as well go all out on the garlic this evening).

I pounded some bavette within a millimetre of its life before stuffing with mozarella, basil, pine nuts, raisins, breadcrumbs and flat leaf parsley. Rolled up tightly I then tied them up with string (very badly indeed) and after browning all over were cooked very gently in a rich tomato based sauce for an hour and a half before serving with wide pasta and sprinkled with gremolata (grated lemon rind, finely chopped garlic and flat leaf parsley).

I deliberated long and hard what type of beef to use. Bavette was the wrong choice. No wonder the butcher thought I was mad when I was explaining what I was going to do. ” Long slow cook Bavette Madame?” he looked at me thinking he had heard incorrectly.

“Yes, I said stubbornly, that will be all thank you”.

In fact in the recipe it did say that this cut would be suitable. It was not.

Delicious yes. A wonderful combination of meaty, rich winey sauce and then a sweetness from the raisins and pine nuts. The gremolata taking it to another dimension. But tough, yes tough. Grr. Annoying.

We continued on a high with the wine. A bottle of Meursault 2014 Les Tillets from Patrick Javillier was tasting just wonderful. The last bottle in the cellar (isn’t that always the case when something tastes amazing), it was elegant and fresh with a beautiful citric quality and wonderful minerality. Just heavenly.

And then down we plunged. Our 2018 Barbera d’Alba from Elio Altare was so volatile that we couldn’t drink it. Think of drinking something that tastes and smells like permanant marker pen with a hint of nail varnish remover.

In theory it should have been the perfect choice to accompany our meaty tomato rich sauce. This was very disappointing. We’ve kept the bottle to retaste tomorrow. Elio Altare is one of the top winemakers in Piemonte

It’s not unusual to have a little volatile acidity in a wine (in fact sometimes we quite like it), but there’s a limit.

Instead, we opened Tania & Vincent Carême’s Terre Brulée 2018 red which turned out to be a great match. Ripe rich fruit and earthy notes paired superbly with the rich meaty sauce. A Syrah Cinsault blend it has lovely notes of red fruits and nice freshness.

This morning temperatures have risen again and would you believe it, next weekend it looks like it will be mild and sunny (just in time for Nigel’s birthday).