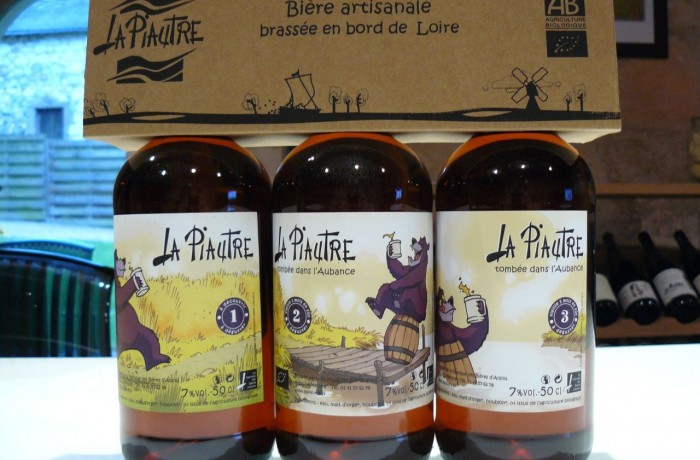 La Piautre is a micro-brewery just a hop across the river from us in La Menitré (no pun intended).  Established in 1999 the actual brewing facility was opened in La Menitré in 2004 and since then has been enjoying local success. The range includes a Blonde, Brune, Ambre, IPA and Stout as well as seasonal brews and one-offs like this La Piautre tombée dans l’Aubance.

This brew was divided into 3 and each third was then aged differently.  The first third was aged for one month in standard maturation tanks in the brewery, the second third aged for one month in Coteaux de l’Aubance barrels (futs of 400 litres) and the final third was aged for 5 months in Coteaux de l’Aubance barrels.  The beers are labelled 1,2 & 3 and are meant to be tasted alongside each other just as you would during a wine tasting.

The result is very interesting indeed.  No 1 is quite delicate on the nose with a lovely creamy malty character.  It’s floral but gentle, soft and not very bitter at all although it has good length. No 2 has a more pronounced nose with a distinct apple cider aroma and is very fruity on the mid palate.  There’s a little tannin at the end and a discreet note of bitterness right at the end accompanied by a slightly caramel, butterscotch note.  No 3 has an even more pronounced nose.  Less subtle and without the apple cider aroma, it has hints of caramel and dried fruit and even a slightly whisky edge to it.  Bigger and fatter  and with higher acidity at the beginning a lovely bitterness creeps in at the end.

During a recent tasting with a group down from the racing at Le Mans the result was clear – it was either No 1 or No 3 that got the vote.  The cider quality of the second beer was less popular.  For me, No 3 was the clear winner.  All three were tasting pretty delicious and it has to be said that despite being 7% alcohol are easy to drink.

If you’re in the region you can call in on a Saturday and buy direct from the brewery or can find them in most supermarkets around Angers & Saumur.