Getting up close & personal with food 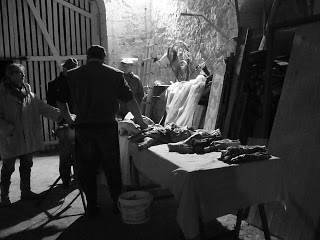 Wednesday morning at 5am we wrapped up warmly and strode across to our neighbours for a day of action. There, in the cave, the charcutier Philippe was already busy at work butchering the pig that he had slaughtered the evening before. This was a taste of reality – of facing up to food.

My grandparents in Lincolnshire used to have a pig every year and I remember the activity in our kitchen when I was a little girl. Everyone was involved and nothing went to waste. We used to laugh at the expression ‘there’s nowt you can’t eat but the squeak’ as everyone got stuck in making sausages, hazelet, brawn, and stuffed chine (all local Lincolnshire specialities) as well as rendering the fat down for lard and home made pork scratchings.

Here is France the joints are butchered differently so instead of leg, spare ribs and pig’s fry we have echine and sous noix, noix patissière, escalopes, rillettes, boudin and andouille. Again, nothing goes to waste and even the bones are kept for our labrador.

Philippe has incredible knife skills as he deftly joints, cuts and prepares the different cuts of meat. It takes around 10 hours of solid work to deal with the whole pig and it’s a pleasure to watch. I’m just envious that my knife skills are not as good as his.

This cauldron is for the rillettes. Large chunks of meat as well as fat, the trotters and big bones for flavour are simmered for about 3 or 4 hours. The trotters are then taken out (for deboning and stuffing), the big bones removed and the mixture is seasoned with generous quantities of sea salt and black pepper. Regular stirring ensures the meat doesn’t catch on the bottom.

Minced pork goes to make sausages (large and small) and another batch is mixed with minced onion, garlic, parsley, salt, pepper, eggs and cognac. This will make a whole series of terrines, each one having it’s own additions (I made one with added pistachios and another with dried apricots).

This is the andouille – the intestines that are encased in a large intestine and will then be smoked for 2 days in the chimney over smouldering ashes. I have to admit that it’s not my thing but my French friends love it!

This is a mixture of meat, fat and around 10kg of chopped onions that has been simmering for about 4 hours. The onions are soft and sweet, the fat has melted and the meat become tender. Lots of black pepper and salt are then added before the addition of the blood. Yes, it’s black pudding or boudin noir.

A braver man than I, here Philippe tastes the mixture to check if it has adequate seasoning. I was accused of being a bit of a chicken at this point as I couldn’t bring myself to dip in a finger and taste.

After pouring the mixture into its skin, Philippe ties individual boudins that are then immersed in water at 80°C for 20 minutes. It’s crucial that the temperature is just right – any cooler and it won’t cook, any hotter and they explode. We made 207 boudin in all.

We enjoyed the ribs for breakfast at about 9am. Sprinkled with herbs and a generous amount of sea salt and served with a glass of local red this kept us going until mid-afternoon when we finally stopped for lunch. We all pitched in. Homemade houmous and a pissenlit salad (the first tender dandelion leaves) to start with. A rich stew made from the lungs and heart of the pig as another entrée (an acquired taste I’d say as the texture is a bit odd but delicious in flavour – it’s cooked for several hours in 2 bottles of red wine with shallots, herbs, garlic and seasoning), a big pot of fish soup with garlicky croutons, a selection of cheeses and chocolate profiteroles to finish. Oh, and of course a little wine to accompany it.

By 5pm we were done – rillettees put in jars ready for sterilising, boudin ready to eat or freeze, a whole host of joints to enjoy in the months to come and terrine dishes full ready to be cooked.

I realised during the day just how divorced from our food the majority of us are. I’m not better than anyone else in this matter – I too have become estranged from it in recent years. We are so used to buying meat from the supermarket that we give little regard to the life of the animals we eat. Because we don’t have to face up to the reality of what’s involved in getting it from field to table we avoid the issue. I do think that if we were closer to our meat then we would respect it more, eat less of it and less often. And, we’d be prepared to pay a bit more for it safe in the knowledge that whatever the animal, it had lived a happy, free life before it ended up on our plate.