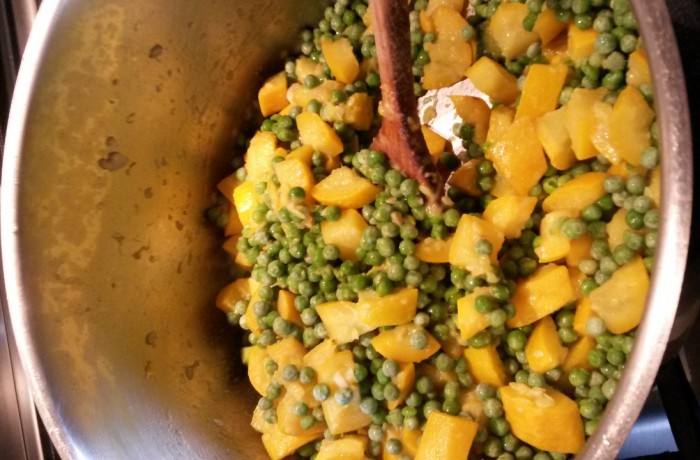 If you still have courgettes pushing in the garden then do have a go at this simple soup. It’s simplicity itself and if you have yellow courgettes even better as the combination of green and yellow in the bowl is very pretty. It’s an adaptation of a River Café recipe that I have changed and modified (I added the parmesan des pauvres to give texture and height to the dish)

For the soup you’ll need:

Around half a kilo (500g) of courgettes either green or yellow

A couple of stock cubes (veggie or chicken)

Half a kilo of peas (fresh or frozen both are fine)

Dissolve the stock cubes in 700ml of water. Cut the courgettes into little cubes, heat a tablespoon or so of olive oil in a heavy based pan and fry the garlic gently, add the courgette cubes and cook gently until soft (this can take around 10 minutes or so and requires watching). 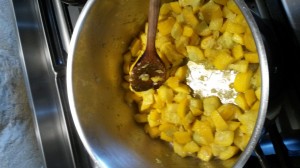 Gently cook the courgettes until soft

Add half the stock and half the peas, bring to the boil and cook until the peas are tender.  Then – either pop the mixture into a food processor and pulse until you have a coarse purée or do what I did which is to plunge in my bamix hand held blender and zap it until I have the right texture. 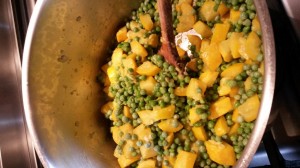 Pour the other half of the stock into a saucepan and pop in the remaining half of the peas. When they are cooked, scoop them out with a slotted spoon and stir them into the coarse purée.  Use some of the remaining stock to loosen the ‘soup’ and season if necessary.  It’s meant to be a coarse, thick soup but the flavours are super light – don’t think conventional soup.

At this point I divert from the recipe and make a parmesan des pauvres to sprinkle over the top. I do this because the original recipe has grated parmesan on top and the guests I cooked this for were vegan.

The grated rind of a lemon

A couple of cloves of garlic finely chopped

Fry the onion in a little olive oil gently until it is transluscent.  Add the cubes of bread and continue to fry until the onion becomes golden and the bread crunchy.  At this point, add the garlic and fry for a couple of minutes, then add the lemon rind and finally, off the heat add the finely chopped parsley.  Be careful not to add the garlic too early as you don’t want it to burn and become bitter.  It’s all about retaining the fragrance of the flavours.  You can make this in advance and put it to one side giving it a little boost on the heat before serving. 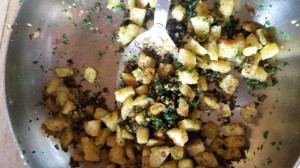 Poor man’s parmesan – bursting with flavours of lemon, garlic and parsley. It’s a little like gremolata and adds a final flourish to the soup

To serve – put a ladle of the hot soup in a large bowl, sprinkle over a handful of the parmesan des pauvres and then scatter some torn basil leaves over the top.  We have lemon basil in the garden that is particularly good but any basil would be fine.  Finally drizzle a little olive oil over the soup (use the best you have, it makes the dish), sprinkle over a few flakes of sea salt and serve.

I’m afraid I don’t have a picture of the final soup as work got in the way but suffice it to say that one of our guests said (and I quote her comment) ‘it was the most delicious thing she had ever tasted.’ Now I don’t lay claim to doing anything extraordinary but I can tell you that it is very very easy to make and is very very good.