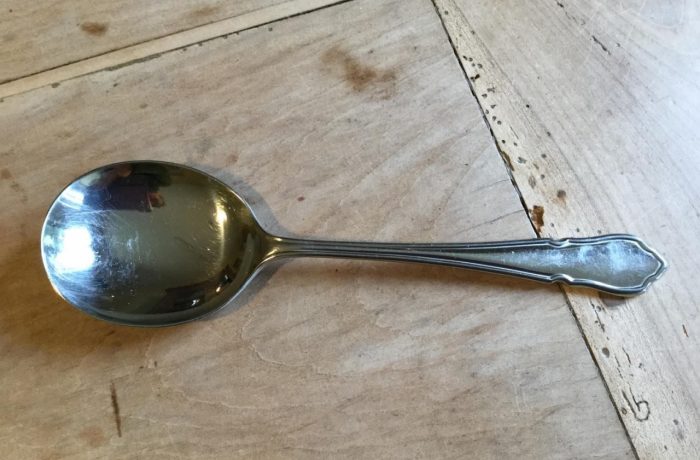 Getting lazier by the day. I woke up at 8am this morning and only just beat Dad downstairs for my first cuppa. I’ll have to make sure I set the alarm tomorrow for my return journey.

Interesting conversation with Dad about soup spoons this morning. Interesting I hear you say? Well – we were discussing their cutlery (I know boring) – which I rather like but I commented that I find the soup spoons too large.

This is where Dad kicks in with his historical explanation of the invention of the soup spoon by the Victorians and how to use one correctly. Clearly I’ve been using it in rather a vulgar manner.

One does not put the soup spoon in the mouth. One scoops the top of the soup away from oneself and then sips it from the side of the spoon. This is because soup is hot and by scooping it across the top you remove the part of the soup that is cool enough to sup without burning ones mouth. Then, when there is little left, one tips the bowl away from one to finish the remainder.

Apparently before the Victorians invented the soup spoon, tablespoons were used for soup. There you go. I stand corrected.

No more cooking on the agenda today so I have a bit more time to relax and chat with M & D.

We got out a new 500 piece puzzle late yesterday so we all enjoyed dipping in and out of that this morning. Puzzles are quite addictive aren’t they. Suddenly it was time for another gin and it! How time flies.

Lunch today was what my Mum would call ‘bits and bobs’. A bit of cold tongue and prawn cocktail made into a sandwich (not together you understand). Brown bread for me and Mum, white for Dad. The bread here is dire. The small wholemeal loaf that we finished today was still going strong after 5 days in the bread bin. Enough said.

Dad’s white sliced came out of the freezer and after 15 seconds to defrost in the microwave reduced itself to about a millimetre thick when spread with butter. Great bread is not on offer here that’s for sure.

A bit more puzzling in the afternoon. Making good progress but will definitely not finish it before I go.

Dinner of spag bol that I made a couple of days ago was easy and tasty served with a bottle of Chianti. Chatting about the past I learnt that my Grandfather (Grandpop to us) was a gunner in the first world war. How come I never knew that? I can’t believe it’s never come up in conversation before. Maybe I didn’t ask. Maybe Dad never told me. What?

And we talked about Dad’s burning desire to become a farmer from the age of 10. He never did become a farmer because his family couldn’t afford to buy him one and there was no land to rent around Lincoln at the time. Instead he became an apprentice to his uncle and qualified several years later as an agricultural surveyor and auctioneer.

As a child of 10 he rode the horse and cart to gather the potato harvest and from the age of 15 helped his farming neighbours in the school holidays milking 18 cows every day and walking them through the streets of Lincoln to their field, returning them back to the farm for the second milking at 3pm.

This is hard to imagine. Lincoln is a city and I just can’t envisage walking the cows from where he lived down to their field.

I sense the dread of my looming departure in both of them. It’s been good to spend time with them and I’m sure they wish I was staying longer but they understand.

To bed in good time. Up early tomorrow for the journey back to France.