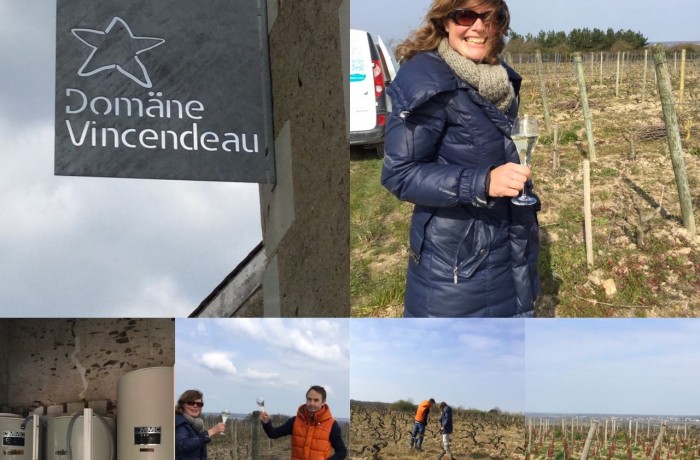 Close to the banks of the Loire and overlooking the small island of Behuard, Liv Domäne has found a delightful spot to base herself and her winery.  Originally from Wiesbaden she studied science and chemistry and then chose to do her Masters in Strasberg. It was after this that she decided to seek out a parcel of vines and launch herself as a grower and producer.  Sat with map in hand studying the wine regions of France, Anjou was not at the top of the list. In fact It would be fair to say that Maine et Loire wasn’t on her list at all – until a friend of her and her husband invited them to spend a few days here…  she was seduced by the beauty of the region, the warm welcome of the people and it’s wines. 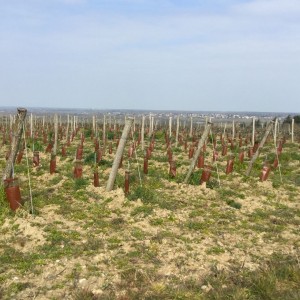 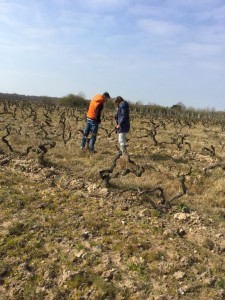 Looking at the older Chenin vines. The ground has been hard to work this year because the lack of cold weather has had an impact upon the soil 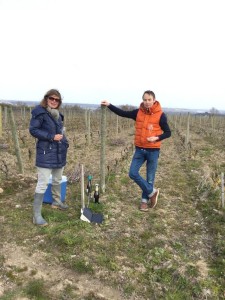 Tasting in the vineyard with Liv. You can see for miles – Angers in the distance, the Loire below. It’s a perfect spot, elevated and exposed

Lucky enough to find both a home and parcel of vines at the same time in 2013 she settled in the picturesque village of Rochefort sur Loire just by the riverside in 2014.  The 7 hectare parcel of land (a couple of kilometres away from the winery), is perched high on the Corniche Angevine and has stunning views. A mixture of vineyards,  prairie and woodland, 4 hectares are currently in production and she has planted half a hectare of Grolleau with which she hopes to produce a rosé in a few years.  The youngest Chenin vines are 10 years old and the older parcels more than 40 years old.  Pruned to two short canes each with 3 buds she uses a tractor to work the more widely planted rows and a horse to work the rows that are narrowly spaced.  Walking through the parcels the ground is littered with green and purple schist with lots of quartz.  The ground is hard after the dry conditions of 2015 and the lack of frost (so useful in breaking the soil down over the winter months).

Currently in conversion to organic, she will have ‘ en conversion’ on the labels of the 2015 wines and will be fully organic by 2017.

We tasted standing amongst the vines, admiring the beautiful countryside below us.  The Crémant de Loire is crisp and fresh with bright acidity and an elegant mousse – a perfect aperitif. Her Anjou Blanc 2014 has remarkable concentration and it’s easy to see how many people think it has spent some time in oak as the rich golden colour and weight on the palate are deceiving. This is clearly down to the position of the vineyards – she achieves remarkable ripeness.  In 2014 she had to appeal to the INAO to pick her grapes early as their analysis of potential sugars was showing at 10,5 and her grapes were coming in at 12,5. In 2015 she expects wines with even more richness coming in at around 13,5.

Liv exudes energy and enthusiasm from every pore.  Clearly passionate by this new project in her life, her wines are good and she is definitely one to watch for the future.  Bright and smiley, she seems happiest in a pair of wellies walking from parcel to parcel, picking up rocks, talking terroir and sharing her new found love of Anjou and the Loire. 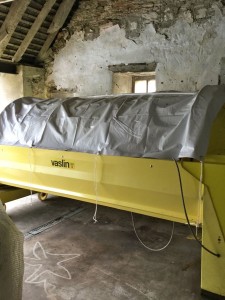 In the winery – a Vaslin press 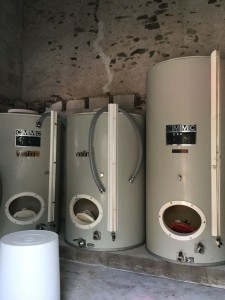 The winery is still very much a work in process 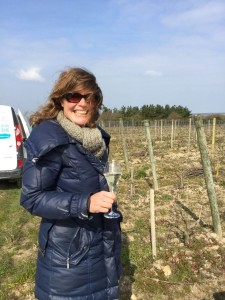