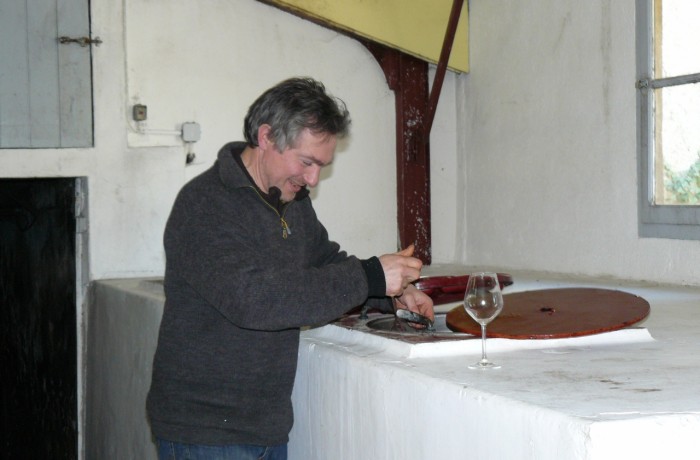 I have to admit – I got a bit carried away the other week announcing that harvest is pretty much over here in the Loire.  Yes, for the majority of people it is and as I remarked last week, bunches of Chenin were still hanging in the vineyards but after the 40mm of rain that fell on Monday I thought that would be it for those hanging on in there for a final pass through the vineyard.

I was wrong!  Conversations with  2 producers this week confirm that they continued to harvest this week.  The high rainfall, while complicating things a little, did not force growers to throw in the towel and Chenin destined for sweet wines is still out there (just a teensy bit). 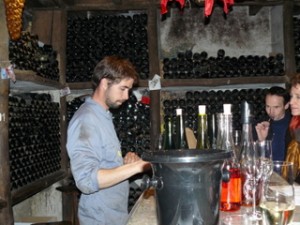 We spent a couple of hours with Jean-Hubert Lebreton yesterday at Domaine des Rochelles in St Jean de Mauvrets (Anjou).  He was on fine form and in very positive spirits indeed.  Yesterday saw them picking the 4 remaining rows of Chenin that will go into their delicious sweet wine, Ambre.  After the rain at the beginning of the week, Jean-Hubert took the decision to leave just 4 rows and hope for the best and his gamble paid off (picked at a potential of 23).  He’s pleased with both the quality of the grapes and the volumes they have brought in this year.  There will be a Croix de Mission, Les Millerits and an Ambre in 2014 – une très bonne nouvelle.

Half an hour away Leduc-Frouin continued picking the last of the Chenin this week, finishing today according to Natalie and Antoine Leduc, as the weather is due to break again.  They too are delighted with the vintage. Their Chardonnay destined for Antoine’s light IGP was super healthy and ripe and this has followed on with Grolleau, Cabernet Franc, Cabernet Sauvignon (fully ripe and mature this year) all looking good with decent potential alcohols, structure and balance. 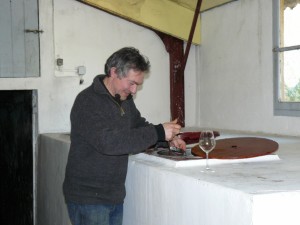 Elsewhere in the Layon, one or two estates are hoping to pick into next week…..I’m eating my words!

Cheers from a happy Anjou!